This July it’s been extremely hot. Normally, riding is a great way to cool off, until of course, you stop in traffic for any amount of time, or find yourself riding painfully slow through highway construction zones for miles on end.  And, added to the heat factor of the hour, when we ride we get somewhat “Harley’ed up”: some leathers, boots and gloves.  Normally not an issue, as leather is supposed to keep you cooler with the right ventilation but getting dressed in that garb today, was an issue for me because we do not have air conditioning in our house and I already felt overheated just sitting around.  And cooking, forget it.

With the temperature tottering around 100 degrees, we decided to cool off by eating out.  Our little downtown village offers a lot of food choices however eating at the same restaurants with no menu changes tends to make things a bit boring, so, after a quick search on craigslist for interesting garage sales, and actually finding some, we decided to run down to the Toledo area: in the car.

We were off to a craigslist garage sale that boasted DJ equipment and other assorted goodies, all being sold in by the people claiming to collect the money in the name of their missing children.  Hmmm not sure about this one, but we headed there anyway, US 23 to US 475 off the freeway at Secor Road Toledo and turned right into the first restaurant we found.  I think it was Big Boys.  Didn’t look opened to me, it was dark, no cars in the parking lot, but we stopped anyway. Taped to their front door; a small handwritten note: no electricity.  Not sure if the entire block was not out of juice, but we could see down Secor and traffic lights and signs looked bright and working.  Driving a little further down from Big Boys, we were attracted to a bright sign Uncle Johns Pancake House. Okay pancake house it is. 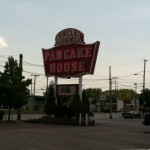 Uncle Johns shares a parking lot with “Monroe Brake and Auto” on the left and “Russ Car Wash” on the right.  The parking lot was crowded, but for which place, I had no idea.  (The patrons from Big Boys who just wandered here like we did, from down the road?)

The building that houses Uncle Johns is nothing special, mostly white with adequate signage indicating you’re at the right place for Uncle John’s Pancake House.  Once inside, turn right, the only way to go, leading right to a hostess/cashier stand, which is facing the same direction as the hallway, to the right, giving the hostess a view of the waiting area (a few park like benches set up in a square).

The hallway is interesting; there are things to read, such as past articles and advertisements for Uncle Johns Maple Syrup and pictures to look at.  There’s also a free standing phone booth, the same type of telephone phone booth used by Superman, complete, with folding privacy doors.  The booth blends in so well I didn’t notice it until I was leaving.  The old dial phone was not in working order, but very interesting just the same.

We didn’t have to wait for a table, we were seated immediately.  Our table, actually one of the several 4 seater booths on the perimeter of the room, gave us an excellent view of the car wash next door.  Our table wasn’t set; the hostess told us someone would be right with us, so out came the cell phones and down went the elbows.  The table was sticky, very sticky; we changed our posture to one hand on our lap, the other used to hold the phones.

A wait person did come over to the table to refill the condiment tray and the 5 sticky, finger printed over, syrup containers that was sitting on our table.  She followed up with a sugar refill.   We told her the table needed to be cleaned.  Apparently her job was limited to refills, an interesting job description if you can get it, so we waited for “our waitress” to clean the table, which she did a short while later, with a soppy wet towel, leaving the table wet and sloshy and somewhat more sticky.

We sat there for a few minutes without touching anything, waiting for the water to dry, and as it did, the table appeared cleaner by the second, and hey, we had new syrup and a full sugar dispenser so we were all set.  Our waitress gave us her name and told us she was a bit overwhelmed that day.  Not sure why, there were several wait staff running around and a few hostesses and at least one bus boy.

(To Uncle’s John credit, I did notice that all the staff was in uniform, black pants and white shirt, clean white shirts, always a plus when you waiter is in clean clothes.)

In spite of the heat we both ordered coffee and breakfast.  I had my typical cream issues; this time there wasn’t any on the table, so I asked for some fresh creamer.  Leaving the coffee with us, our waitress took off, for which I thought, was to retrieve more cream, but she only came back to take the rest of the order.  She never brought any cream. Eventually I got tired of waiting, and just took another creamer off an unoccupied table, problem solved.

My husband’s coffee was placed in front of him; he took a sip, put the cup down and started to read the menu. At some point he picked up the cup, it was sitting in a ring of coffee. He wiped the bottom of the cup, took another sip put the cup down, and a puddle started to form across the table.  Closer inspection, the cup was cracked. 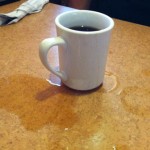 I asked the bus boy (who was conveniently behind us bussing) to either bring another cup of coffee or get the waitress.  He gingerly picked up the cup, and proceeded to show everyone he passed that the cup was leaking: I would imagine not much excitement at Uncle Johns Pancake House.  Another cup of coffee appeared with our food.The menu bragged Uncle Johns had been there since 1963 and because it was still standing, we totally expected the food to be decent. When we did order I opted for New York corned beef hash and eggs over medium, with raw onions instead of sautéed onions, sour dough toast.  Hubby ordered an omelet (the spicy hot one with chorizo sausage) and pancakes instead of toast.

As we waited for our meals, we took in the décor, which sort of carried the same theme as their hallway.  Pictures and articles, but no phone booth just an upside down row boat secured to the ceiling: On the opposite side of the hallway wall, hung several photos of celebrities adding some credence to the place.  I believe the picture of Jamie Farr (he’s from Toledo) was signed too.  (I found out from the cashier no celebrities to her knowledge has ever darken Uncles Johns door.)  There were a few signs for superior coffee, a display case selling Uncle Johns coffee cups and different unrelated odds and ends.  There was a lot of advertisement for pure maple syrup throughout the restaurant.

The ladies room door only opens one-way, in, so I pushed it, pretty hard I guess, enough to hit the busboy, who was directly behind the door standing inside the room next to the yellow “rest room closed for cleaning sign”, looking surprised, holding a bag of garbage in his hand.  “Sorry I said, I didn’t know you were in there.”

I almost suggested that the sign should go on the other side of the door, but who am I to point out something so obvious. He just grunted, the door swung shut and he didn’t come out of there for several minutes.  Now I know why the waiting area is next to the ladies room.

I’m not sure what took him so long, the restrooms was one of the smallest ones I’ve seen, and fairly dirty.  There was a small vent overhead, which was full of cobwebs, lots of them.  I guess the cobwebs stay until someone turns on the vent, and from the looks of it, may have not turned on since 1963.  I left the ladies room, went directly to our table and wouldn’t you know it, hot food was waiting: just like magic.

As I sat down the conversation at the table was my husband questioning the waitress about real Maple Syrup.  He was pointing out that some restaurants charge a small fee for the privilege of severing real Maple Syrup and asked for the real stuff.  She pointed out that that syrup on the table was “natural” maple syrup, told him try it and offered to bring out the bottle and show him.  Not necessary he said.

When she left the table, I pointed out to my DH the place was reeking of Pure Maple Syrup advertisements – they were boasting they only serve 100% maple syrup though out the entire building but he wasn’t’ convinced, as he told me; “they probably don’t know the difference between maple flavor and natural maple syrup” and offered a piece of syrup drenched pancake for my opinions.  My taste buds aren’t that fine-tuned, so I wasn’t sure.

We started eating. My husband loves spicy hot foods.  He did not find the hot sausage omelet too hot as my DH only found a few pieces of thinly sliced chizo sausage, amidst the egg and all that cheese.  Not sure how, but he did find a slice of onion, just one slice, but who’s counting.  I’m sure there was more. 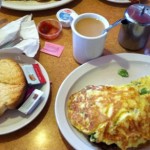 He said the pancakes were okay, nothing special, and I don’t think there was real butter, not sure on this one.  My food was okay, the onions were raw as requested, the corned beef was extremely dry and crispy, the toast was very light, it was okay (how can you screw up toast anyway?)

My first impression, pretty good place to stop, cozy, very young wait staff, but polite, definitely a family type restaurant, and there’s no rush to eat and get out.  The food was hot, but not as flavorful as we would have liked it. Neither one of us finished our meals.

We will not be going back, in fact on the other side of Russ’s car wash has a sign for another pancake house, the original one, maybe this is a block war?  My opinion if you going to pay $10 or more for a tasty meal there’s other places to consider. If you want a place to sit with friends, drink coffee and not be bothered much, this is ideal. Of course we only tried the breakfast foods, lunches maybe way better or not.