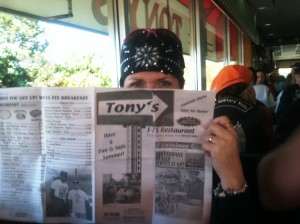 Columbus Day weekend, we decided to ride up north to see the fall colors. Michigan is beautiful when the trees are turning red, orange, yellow and purple. I debated between taking the trip as a passenger on the back of my husband’s bike or as a rider. That morning I made a decision: I was going to ride the 200-300 miles up North-let the adventure begin.

We left early that day, about 7:30a.m, not exactly pre-dawn, more like pre- heat. It was cold – cold and damp. My saddle, in spite of my Ride being in a garage all night was soaking wet. Leathers are normally great in cold weather, but this was a foggy, cold, wet morning barely 50 degrees, with the promise of reaching the 80’s sometime during the day. Therefore, I skipped the shower and the long johns. And unlike my husband, I didn’t order heated grips on my new bike, which I do regret not getting, every time we ride in the cold.

Before we left, we downed some hot coffee and gobbled up a bowl of cold cereal. We were about an hour away from our first rendezvous point, just enough riding time for the sun to burn off the fog. I was freezing the entire way, only wearing summer gloves and feeling cold air rush down my neck–oh and then was the hassle of a continuous foggy helmet visor. All reminders of why I like to be the passenger at times.

And to think, we just started riding, maybe 10 minutes down the road when it hit me: this was going to be a two-day event!

Aside from the cold the first part of the ride was uneventful. The back roads were still unkempt, the traffic was light, and no deer in sight. So far so good.

At the first meeting point, two more bikes and a trike joined us. One rider had a passenger–our party total was now six. The second meeting place, again, was an hour or so down the road. We took off riding north on Telegraph Road, US 24, where there are lots of traffic lights and fast cars, and lots of fast cars trying to dodge lots of traffic lights.

That leg of the journey ended in a car dealership parking lot, where we picked up another rider and passenger. The only little incident, we rode ourselves right into a car parking lot dead end so each of us had to do a 180, which I must admit to do it correctly, every time, I need more practice. I did make the turn but at the last second I put my foot down and a week later I am still suffering for that mistake.

Finally, we are all together, a total of eight. Next stop, Breakfast at a place called Tony’s and of course, it was about another hour away. Everyone had eaten at Tony’s before, except for me, I was a Tony virgin.

From the outside, Tony’s is nothing special, it’s just a big wood frame one story building sitting on the edge of a parking lot. There is some signage, but nothing spectacular. Tony’s shares parking with a gas station.

The parking area was crowded and is big enough to accommodate Semi’s and RV’s. Considering how it looks, how it is laid out and the food portions served, I suspect Tony’s started out as a truck stop turned family restaurant. (Truckers probably don’t have enough time to wait on the long lines to be seated so the gas station probably makes out selling premade sandwiches.)

Tony’s was very crowded for a mid- morning Saturday. The eight of us stood in a long line inside a long hallway or covered porch that has windows on either side for a view of the parking lot one way, or a partial view of the dining area the other way. There is also a front and a backdoor leading into this hallway. Most everyone entered the line from the backdoor: some tried to circumvent the line, entering in the front, but that didn’t work too well for those people.

The hallway is decorated with Auto Trader Magazine racks, with some local news fliers and various gumball and toy machines. For those too tired to stand there are a couple of benches along the wall. I tried to look into the restaurant, however, most of the windows on that side are shaded so you could only get a glimpse of the tabletops.

After a brief 10 minutes, the hostess appeared. She was trying to seat the group of three before us, and all eight of us at once. She told us we would not be able to sit together as a group and in fact she didn’t think we would all sit in the same area, and left to clean off three tables. She returned shortly and told our party (good natured) that her (expletive) manager had given our tables away and please wait – the wait was only another 3 minutes.

Finally, the hostess took us to our seats. The place was so crowded we had to weave our way around tables and chairs. The restaurant reminded me of a Manhattan deli at lunchtime, busy -busy. We were seated at two tables in groups of four. Out tables were located against a wall in the furthest corner of the room opposite the kitchen. (A Biker table but not in this case it was the only vacant area.)

The server came right over, took drink orders and handed us menus. The Menus resemble a newspaper only a bit more durable. You can take them home as souvenirs or give them back for reuse. My menu was ripped and spotted with food; I did not want to take it home I gave it back for reuse. Breakfast items included the normal pancakes, biscuits and gravy, steak and eggs, French toast, corned beef hash and so forth. Slightly higher than normal meal prices: i.e. Extra egg for $1.

The waitress returned, a slim girl carrying four big mugs of hot steaming coffee and four jumbo plastic tumblers, the type of tumblers that most restaurants are so fond of using, filled to the rim iced water. I was impressed, not a drop spilled. Then she took out an order pad and a pencil, she didn’t sit or crouch down trying to be the overly friendly waitress, she just wanted the orders and move on. We ordered one serving of ham and eggs, over medium, the other couple, steak and eggs, and a side of corned beef hash with egg. 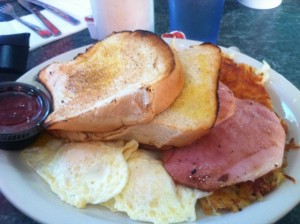 Less than 20 minutes of ordering our waitress arrived with all the food the table had ordered, followed with fresh coffee. She didn’t use a tray; she carried all the dishes balanced on her arms. In addition, she had two extra plates for sharing. Our other friends, sitting in the table in front of us, had ordered biscuits and gravy, pancakes, eggs and bacon and more eggs. The same waitress served them a few minutes later.

Our plate of ham and eggs was actually on an oval shaped platter, the kind you might put a turkey on, covered with food. My husband and I split the four eggs, toast, the mounds of hash browns and three huge slices of ham. The toast alone was the size of the length of an Italian loaf of bread, done to perfection. There were two slices; we each took one, broke them in half. They also served strawberry jam in a covered plastic container, a container about the size of a 2-ounce jello shot. The jam may have been homemade and was really good. 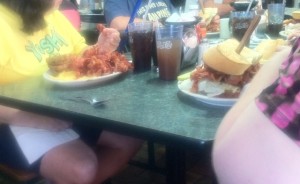 The food looked great; however, my second egg was too runny for me, so I offered it to my DH, who was delighted to take it. I opted for one slice of ham and made a sandwich with my half of the toast. It was tasty, the food was hot and the service was fast and efficient.

The table seated next to us had ordered a BLT, eggs, and bacon. Her plate of bacon was piled so high it look like a basket – the sandwich so big, it might feed a family of four. I just had to take a picture.

With Breakfast over with little to none leftovers between our group of eight, we were out the door, getting ready to ride to our next stop: Bronner’s.