Apparently several people also agreed that Another Broken Egg is the place to go for breakfast. The restaurant (no matter which one) was always crowded; there was always a line to get a seat, and it seemed  no one left the line, even people with those less than angelic children. Any time after 8AM, on most mornings the line spilled out on to the sidewalk and people waited because no matter why you are there, to sip hot steamy coffee from a handmade ceramic mug or feast on a midafternoon brunch – It’s worth the wait.   And take note, they are only open until 2 in the afternoon, so get there early.

We had great food while staying on the Coast. The only issue I had during this trip was the area we were staying in: constant off shore blowing wind. Each morning before riding I had to rid my bike of the layer of sand that had accumulated on it during the night. There was always a sticky film of salt and sand covering everything. I didn’t bring a bike cover and when I wasn’t riding, my poor baby sat unprotected, a victim of the elements, as grains of fine wet sand worked their way into every crack and crevice of my Bike, bringing along an apparent accelerated rust rate noted by the brown rings around some of “Harley Fasteners”. Rust,literally appearing overnight. Rust on a new Harley??

The Florida Coast is not a good area for Bike ownership. 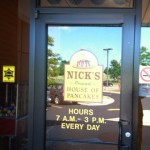 Nick’s Original House of Pancakes is located on the I-94 service road running parallel to I94 in Ann Arbor new Briarwood Mall; Only a stone’s throw away from McDonalds, TGIF and Joes Crab Shack.  Across the way in the Oak Valley strip mall, additional food choices include the Outback Steak house, Lotus Thai Restaurant, Godaiko (Japanese) and a few others. With all variety and competition you would think Nicks would be a little less crowded than Another Broken Egg, not true, it’s always crowded, full of happy chatty Nick customers.

Nick’s customers can dine everyday but only between the hours of 7am-3pm;their parking lot is deserted any other time.

Nicks parking lot is big, not shared by any other business, with plenty of room to park just about anything. Go thru the front glass doors of Nick’s Original House of Pancakes and through the foyer: you can use the gum ball machines on the way out, if you’re inclined to do so: walk right, up a slight incline and you’re  facing a glass display for pies and cakes,  with view of the cooks working feverishly  on their morning concoctions. Slightly to the right of the display case stands the cashier counter and a standing sign that’ normally reads:Seat yourself, which we usually do.

The restaurant occupies an old Big Boy’s building, and just like any Big Boys you’ll find a mixture of booths, tables and chairs layout in Big Boy format. Unlike Big Boys’ of years ago, there’s a few flat screen TV’s hanging high, spewing out the latest News in running text.

Once seated you’re given a menu and an offer for a beverage.  You’re actually given time to read the menu and decide what to order: always a plus. Their daily SPECIALS are not on a piece of paper laid inside the menu; they are written in bright neon colors on expo blackboard visible to most of the diners just by looking upward toward the kitchen.   Hence the wait staff did not have to read a list of specials to each patron. 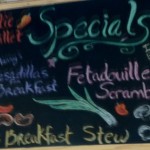 When you order you will notice the waitress does not commit your order to memory or sit on your lap or act like your long lost friend. They write down what you want and how you want it: no mistakes. During your meal they don’t bug you every five minutes to see if you still like what you’re eating and they don’t leave extra drinks at the table, just in case you wanted more. They return to your table to fill your beverage, and bring out the check in a timely manner. They do make sure you have everything you ordered and as always everything is hot. We found the wait staff attentive, friendly and clean.

Today I decided to be adventurous by ordering from the SPECIAL board, selecting the Breakfast Quesadillas. My SO; ordered cinnamon raisin French toast with a side of bacon.  That’s in the menu.

While we were waiting for our breakfast, directly in front of us, the waitresses seated an elderly couple. The women looked frail and indicated she was cold as she sat on her chair huddling next her elderly companion.  He didn’t look cold, and offered her his suite jacket, which she declined. (It was a bit chilly; Michigan businesses love their air conditioning.)  She clearly wasn’t enjoying the moment. Their waitress returned in a matter of minutes with their drink order and a sweater: offering it to her for the duration of their meal.  It’s just that kid of restaurant. The women put on the sweater and seemed to enjoy herself the rest of the time we were there.

Our food arrived! Placed in front of me a gigantic Quesadillas bloated with scrambled eggs, onions, chorizo and guacamole served with a side order of pinto beans. Like all portions found at most restaurants lately, designed to keep you stuffed all day long, this portion was enough to share, but tasted so good . . .I hesitated to do so. 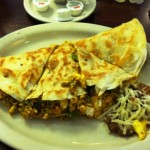 My husband received three hardy slices of French toast with powdered sugar: just asking to be buttered.His breakfast was gone in 60 seconds, he may have tasted it. He sure didn’t leave any for me to try. I had to take his word that the food was great. He was happy; he even drank all his coffee. That in itself is unusual.

I could only eat one quarter of my order, and offered the rest to him. I was full. My SO could only manage to eat the other half of my second slice of quesadillas, and he was full. I didn’t take the rest home. Reheating egg anything never is good option.

Nick’s Original House of Pancakes has wonderful, hot, never ending coffee. The multi- grain toast that I usually order is excellent. My breakfast that day, as all days was delicious. My Quesadillas had scrambled eggs, done to perfection, spices perfect, just the right amount of everything. Definitely something to order again: maybe to share.

The food, atmosphere and parking-all good.

My one complaint (there’s at least always one complaint) I have about dining at Nick’s Original House of Pancakes–the ladies room. There’s only one stall and there could be a lot of competition considering at least half the diners were women. Other than that, like I said it’s all good.

I would recommend this restaurant to anyone. Biker Friendly!  Ride there before 2, for breakfast or brunch-you will not be disappointed. They accommodate big parties, no issue parking your bike and the prices are, pretty reasonable.