As stated on the Tony’s restaurant blog our riding destination was Northern Michigan- we were headed to a lake side cottage resort in a town called Tawas City. Once in Tawas City, our route ran parallel to Lake Huron, taking us past several small town shops, bars, restaurants and resorts nestled along the beach line of the Lake. The roadside tree line, mostly in fall mode, had leaves of bright and vivid colors–which was good, as this was our Fall Color Run.

Tawas City has an underlying musty odor, like most lakeside towns do; those who have been to a lake town know what I mean. This odor permeates everything, including the cabins we had slept in that evening. Thank goodness it didn’t take too long before the lake smell went unnoticed.

The next morning, waking up at first light, I needed coffee. I was still tired from riding. The cabin’s coffee pot made a hot brew of stuff that I could barely drink. I don’t do black coffee, and hate powder creamers, but I drank it anyway. If I wasn’t fully awake from the crappy coffee I made, the morning air, with the fresh lake scent and the cold and damp chill, woke me right up. It was just like the other morning, only this time the sun brought enough heat to quickly warm the air. That was great; I didn’t want to put all those extra layers on again. With everyone packed all six bikes headed to a local breakfast eatery–Mitch’s Pizzeria which, according to the cabin’s owner, was ‘where all the locals ate’.

Mitch’s is located on Lake Street, appropriately named as it’s on a street next to Lake Huron. We all missed the parking lot (I really didn’t see it) – therefore to park, we backed up our bikes against the curb that ran alongside the street, by backing up and parking diagonally. It was a bit downhill, had to watch the tailpipe on one end and oncoming traffic on the other end and make sure the front tire was in front of the white painted line; you know the line that matches the curb with a car width between them. Oh, and then there’s the “oh shit” factor, if you just happen to forget where you are and walk in front of your parked bike – right into an oncoming car. Not an ideal parking place, but workable singulair allergy.

For those who miss Mitch’s parking lot, the parking sucks if you’re on a motorcycle, probably not so much for a car. Or I just think it’s bad because I try to avoid those motorcycle moments that may take a little more effort to achieve: like parking downhill, diagonally in a street with oncoming traffic, but that’s just me.

Mitch’s Pizzeria has a lot of signage. There’s a lit marque sign that reads “Mitch’s Pizzeria Eat in or Take Out” And a portable sign: “We Make Great Breakfast – FREE WI-FI – Chili – “ and their phone number.

We all walked up to the entrance-way; looking thru the big glass front window from the outside the place looked packed. Just leaving were five other “bikers” (you can tell by their clothes 😉 ) who told us their waitress had just quit, that they are understaffed, and we might have a long wait just to get a table. They also told us there was a Denny’s down the street; but hey, we were parked and we were there and…while we were chatting with the other group, two of our group had went into Mitch’s and commandeered an area for us. The rest of us followed inside to rearrange chairs and tables–we were staying.

Inside and out, Mitch’s looks like an older establishment, at least the building looks old. In the big dining area, the only dining area, centered on the left side of the room, on the wall, when facing outside is an industrial sized BUNN coffee set up. The numerous tables arranged in the best fit for the space, are covered with oilcloth that has a pattern of big red flowers peppered with yellow and green accents on a background of white. Our table arrangement placed us against the back wall right under a big picture window with a good view of Lake Huron.

Before we all sat down, a teenager, aged 15 or so, stopped at our tables to pick up the last patron’s dirty dishes clearing the area to the best of his ability. He wasn’t happy and wasn’t thorough… To assist and save time and to not sit down to an elbow full of sticky syrup and dried jelly, I went to the kitchen door, which was wide open, so there may not have been a door, and asked for a dishrag. No problem getting one–came back and proceeded to wipe the table from crumbs and sticky debris. 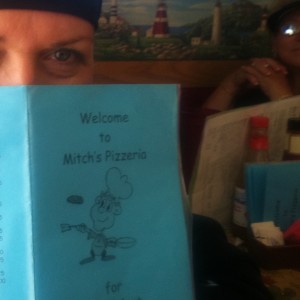 With all of us finally sitting we found the menus and shared, as there were not enough to go around. The menu comes in two colors, bright yellow and bright blue. They are covered with plastic, listed a variety of breakfast items, offering omelets, pancakes, waffles, French toast, cereal, eggs and, of course, breakfast Pizza. The prices were very reasonable.

I wasn’t sure what a breakfast pizzeria was – the décor was mostly a creative wallpaper motif: wallpaper design of stripes of various thicknesses in browns and beige hues ending to a wallpaper border of lighthouses and blue skies, with another solid border of wood, then dark pink painted wood paneling to the floor. (At least that’s how I remember it). The beams from the celling to the floor were also pink. Here and there were some paper pumpkins – Halloween only 3 weeks away!

Mitch’s was busy; we had several minutes to wait before someone showed up to take drink orders. (And clean off the tables again, which was good as I missed a few spots.) As we waited, our teenage bus boy, under his own admission or someone’s direction, made coffee with the BUNN. Normally when someone makes fresh coffee they toss out the dirty filter, put in a new one with fresh ground coffee beans, add water and wait. He skipped the toss out the filter part, and went right to the water. I can overlook the fact that the coffee pot was so used you couldn’t see through the glass, but reused coffee grinds, yuck. Thankfully someone spotted the error and remade the coffee the correct way.

Eventually someone came over to take our order. We all ordered coffee. And I must tell you it was the worse tasting coffee I’ve ever had. Now remember this is one girl’s opinion, but it was bad and nothing helped it, cream, milk, sugar…nothing.

We asked our server about the missing waitress. We were told that Mitch’s is a family owned business, hires family. However our server and the waitress who quit, wasn’t part of the Mitch family. We were told she merely had a disagreement with the owner and left. Contrary to rumors floating around our table, the waitress didn’t quit because of the biker group we ran into when we first arrived…however that would have been a good story. We all ordered and waited.

And waited…and then all started wondering if we made a good breakfast choice. For example, the floor of the restaurant wasn’t level; the entire room lean toward the right; therefore, the tables weren’t level. I think the silverware was clean but…everything else started to look dingy. Our teenage bus boy and guest coffee maker with his big head of fat curly hair wasn’t waiting on tables per se or serving food, but he was definitely a visual as part of the staff. Then out of the kitchen came the little girl, maybe 11 (or maybe just small for her age) setting tables and returning to the kitchen and definitely doing something by the stove that suggested she was cooking, cooking something that needed spatula work.

Our group was getting nervous, then hungry, then more hungry than nervous. Almost 45 minutes had passed since we had sat down: out came the food. I had ordered French toast with no meat. It was wonderful, eggy, and cooked just perfect, tasted great. My husband had eggs, toast, and meat – he ate all of it. The rest of the table had a variety of breakfast items, from two gigantic pancakes on one plate to a total concoction of different breakfast items thrown together to look like a food ad.

The waitress left several glass bottles of syrup between us all, the type of bottle that drips around the spout after use, hence the sticky tablecloth. I normally eat French toast without syrup; tried Mitch’s which I suspect was maple flavored, very close to the genuine thing. Everyone ate until satisfied, no complaints, no one even mentioned the slow service and everyone, except for me drank the coffee.

My observation:Biker friendly, interesting decor, decent food, a good representation of a small town restaurant. It’s a good place to eat and meet the locals. They even handled the waitress walking out on a full house of hungry patrons very well…no panic…just dealt with it.

If you’re on a Motorcycle, Mitch’s is in walking distance from most resorts, or slow down and you might find their parking lot.