It’s only April, April in Michigan and here we are riding down the highway at 70mph or so, things whizzing by, cars weaving from lane to lane trying to be the first car in the game of “can’t let those other cars pass me”, and up ahead, Michigan orange barrel construction taking the ride down from 70 to a slow crawl in a matter of seconds.  Not much has changed since last year.

April in Michigan is a tossup between sunny days or snowy days, and this has been a totally mild winter creating an early Spring.  From a bikers point of view it’s always a great day to ride when the sun is shining (who looks at the temperature besides me?)

This April day started sunny with a promise of a respectable high of at least 53.  I decided to ride, with my SO’s Club, to visit an ill friend in a hospital complex in Ann Arbor.  In spite of knowing better I took a shower a few hours before our scheduled departure time.  What was I thinking..that my hair would be totally dry by the time we were leaving? Wrong.

In spite of using a hair dryer, my hair was still damp;  I knew I was going to freeze. I decided several layers of clothes would fix that.  I may have been a bit over dressed for this chilly nearly 50 degree morning, less than an hour ride away, but only figured that out when I tried to get on my bike.   I had put on long underwear, leggings, jeans, chaps, tee shirt, sweater, leathers, gauntlets, vest, mask and helmet (I know, I know – new law no helmets required). And was I going to ride my own bike? Hell no, I couldn’t bend forward enough to reach the hand controls wearing all that stuff.  So, I decided to ride on the back of the cruiser.

On a good day hosting my womanly frame on the passenger seat of my husband’s cruiser is a challenge today this task was close to impossible. Only by shear will and unyielding determination did I make it on that seat without screwing up the rear protruding antenna behind the tour pack.  And I didn’t even knock him off balance.  Ready to rock and roll.

We met up with part of group and headed toward our destination, booking down US23   until of course we caught up with the freeway construction backlog. We were fortunate to be near an exit, an escape route off this stop and go mess. Once on secondary roads, the remainder of the ride was quick and cold in spite of the overly bright sunshine. I would have loved to have a heated seat and a cup of hot coffee right about then, my husband has heated handgrips at least one of us was warm.

When the bikes were parked most all the men mentioned in passing they were a bit chilly, except my husband.  I bet they were all freezing including my husband.  Two hours or so later, it was time to ride back.  Just two hours but long enough for the bright sunshine to give way to overcast skies pushing the low 50’s to lower 50’s. Before leaving, all 11 of us decided we were going to stop for lunch somewhere close- hot coffee and food, yea!  They picked Denny’s in Ann Arbor, known for hot coffee and cheap meals.

The ride to Denny’s was uneventful and only 10 minutes away. This Denny’s is near three colleges, University of Michigan, Washtenaw CC and Eastern University: lots of young adult foot traffic most of time. This is the Denny’s I use to go to when I was a night owl student-it was a great place to pull an all-night study session with coffee and friends.  The students are still here but some things have changed such as wireless internet, great for laptops (I only had a book and a highlighter back then.) However, some things never change, such as the coffee cups, the color of the walls, the seating arrangement and the grime.

This Denny’s is located right off a high traffic area, Washtenaw Ave in Ann Arbor.  The building is pushed back somewhat from the main drag in a strip mall type setting with a service road running parallel to Washtenaw Ave. This setup make is very easy to drive into their parking lot without the hassle of fighting or holding up traffic. When you pull up to the Denny’s driveway the first thing you’ll notice is the familiar Denny’s yellow and red sign in front and the characteristic slanted roof top, a trademark that hasn’t changed in since I can remember going there. 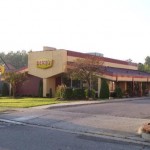 The bikes are parked in the rear of the restaurant, having a fairly large parking lot, boxed in on three sides, so not only can you park your bike out of sight from the main street, there’s enough room to comfortably maneuver them around. There is one entrance, through a glass door to the foyer, which leads directly to the host stand.  As we filed in the front door, we were “ushered to the right side, back end of the dining room.  This Denny’s actually has had two dining rooms, as the room is split into two, a right dining area and a left, centered by the hostess station and further behind the hostess station the bathrooms.  From my previous visits I recall a larger dining area on the left side where I believe, are  tables big enough to accommodate larger parties, but today that areas wasn’t offered to us. There were some people eating in that area, but they may have had reservations, who knows?

We were placed in the furthest corner possible, and when seated we had to split into groups of four and three odd out.  I moved liked those kids in those old cartoons who were too overdressed to play in the snow: too many clothes to sit comfortably in the booth.  My husband slides in the booth first, I sat next to him, on the end as I didn’t think I’d fit otherwise, hanging over the seat as it were. And then my husband wanted to chat with the guys sitting adjacent to us, so rather than talk over me, I offered to switch places.

It was an interesting move. There was no place to put my leather coat and chaps, so I wore them the entire time.  I should have left them on the bike, but who thinks of that – apparently everyone but me.  I did fit in the booth hoping they wouldn’t have to pry me out if I decided to eat a lot.  My leathers didn’t slide getting in, I doubt it would be any better getting out.  At least I cleared the table. 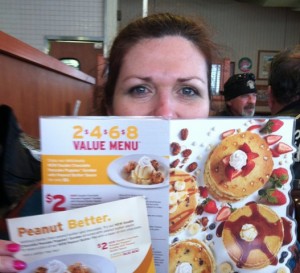 The waiter took drink orders first.  I ordered a coffee, with cream and a glass of water, but darn I forgot to specify water in a clean glass. He returned with a full tray of drinks, setting it down on an empty table and returned with a second full tray of drinks. He then proceeded to serve all 11 of us from the second tray and then the first.  I received a grungy looking glass filled with water with one ice cube, followed by a cup of coffee.  I had to remind the waiter I required cream.  He disappear returning in no time with a pad and pencil to take orders, starting with the first tables in front of us, while balancing the creamer he had retrieved for me, from hand to hand until he got to our table, putting the creamer down in front of me, deliberately stretching across our table to do so.

The cream (or probably some type of coconut processed milk) was white, but as I picked it up to use it, (it was a small plastic creamer), I noticed a yellow harden milk ring along the inside rim. It was difficult to see the discoloration unless the creamer was turned just right in the light. I must have said something aloud as the waiter turned and promised to bring me a cleaner one.  A cleaner one?  Not a clean one?  He continued to take orders; I continued to wait for a clean creamer.

When it was my turn I ended up ordering my Denny’s favorite, described as crispy bacon, avocado, scrambled egg, smoky cheese blend, freshly made pico de gallo and a chipotle sauce hand-wrapped in a large flour tortilla. Grilled and served with crispy hash browns.   Sounds good, doesn’t it?  Food arrived and finally the creamer.

After trading in the dirty silverware, it was the kind of silverware that was dirty way beyond dishwater spots, I started my meal. I think there was avocado in there, I definitely ate something slimly.  The end of the burrito was tough, cause by grilling? The food was warm, not hot, and I think it was warm, not hot, only  because the waiter actually waited until all 11 dinners were prepaid before bringing out everything.  The hash browns were greasy and good, little on the cold side, nothing ketchup couldn’t fix.  My husband had some kind of slam that required sour cream and salsa.  He ate it with gusto, so there were no complaints there.

No one really noticed the food; they just ate it and talked.  I ate most of my meal, not with the same relish as my neighbors but it was decent, I was full and of course, the coffee kept coming. And so did the cream.

Before we all left, I decided to check out the ladies room.  On the way there, I spotted a cook, a hostess and 4 wait-staff chatting by the counter.  However, the bathroom was messy and with all that help you would think it would spotless. – to their credit there was toilet paper and hot water.

Denny’s in my experience,  is the only restaurant in Michigan (besides a truck stop) where you can park your derriere  work on papers, read a book, plot against the regime while sipping coffee for hours and no one will bother you. Their business hours probably contribute to the dirt  issue, being very hard to dust, wash floors and windows with a room full of diners.  So what if your shoes stick to the bathroom floor when you walk in: there’s soap and paper towels and running water.

The food is okay, the parking is great, the menus, change occasionally are the same from Denny’s to Denny’s:  from a Bikers perspective it’s, reliable with no surprises. In spite of this particular dinner, in my experince most of the time the food is served hot and it’s pretty tasty. The coffee is never ending and the wait staff friendly. Almost like home only a lot bigger.  Definitely would go back.  If nothing else, the clientele at night is very interesting.   And it’s definitely a place for bikers to go.