A chilly May evening, riding to the city of Monroe for a meeting, it’s after 5 pm, back roads all the way.  There’s new potholes to avoid, and an occasional harried woodchuck deciding which way to run.  Traffic starts to build up as we near Telegraph Rd., nothing out of the ordinary for that time of night.   There was a slight chance of rain somewhere north of us, but nothing expected.  It’s early enough to have dinner before our meeting so we decided to try the new place next to Big Lots in the Monroe shopping center, Big Blues, Ribs and More.

We park our bikes, it takes a few minutes to disengage and store my GPS,  hang my helmet, remove my jacket and gloves and  put my vest back on,  (I wore it over my jacket).  The vest is worn when we ride and we rarely bag it. I like to wear it, besides it’s a place to carry keys and my phone. I looked in the side mirror, I have total helmet hair with most of it sticking to my forehead, and my eyeglasses are dirty, thoroughly biker grungy from the dusty roads: we enter Big Blues.

There’s a foyer leading to a door which enters into the dining room.  The place is packed and the décor, dark and somewhat sultry, makes it hard to really make out how many people are dinning.  The cashier/ hostess stand is on the immediate right against the wall. On the side of the cashier stand, directly behind the entrance door are two long couches for waiting patrons.  No one was waiting; we were immediately seated at a table for four.  The table was located in the front of restaurant, close to the door right near the cashier stand.  We were handed menus as we sat down.

We read some of the menu and both decided on barbecue sandwiches as we were in a bit of a rush and thought that would be the quickest item to serve.  After all barbecue is not a cook to order meal.

As we waited for the server, we had ample time to look around the place. I was impressed with the change.  Not too long ago this building housed (for years) a Chinese buffet, followed by a fondue restaurant that had opened and closed in a blink of an eye.

Big Blues Ribs and More made a remarkable transformation of the place, leaving no semblance of either of those two former restaurants.  In fact, the simple décor was attractive, good use of chrome and wood, accented with vinyl brown and white tablecloths, which in an odd way pulled the room together. There are booths lining either side of the walls freestanding tables and additional booths placed where the Chinese buffet steam tables had once stood.   The space seem to be utilized well.  The lights are dim.  The patrons are a mix of well-dressed to casual to barely dressed to scary biker. (Boo)

We were on a tight schedule and each tick of the clock gave us less time to eat, so we downgraded our selection from barbecue to one appetizer of fried calamari (which besides the normal food preparation description in the menu is added “ wanna spank it? We’ll toss it with a mellow pepper sauce for a little kick” Okay I never thought of spanking my calamari, this place might be more than it seems.

The waitress finally appeared at our table for drink orders.  She wasn’t about to take a food order, but we insisted on telling her we were (now) in a hurry as we had waited a good 15 minutes since we sat down.  We were told it would be impossible to get an appetizer out that quickly, she said “There’s six tables ahead of you.”  They were either understaffed in the kitchen, the chief didn’t multi-task well or the waitress had to serve 6 tables before us.  I didn’t ask; we  only ordered two sweet teas , and were able to get that order in 10 minutes or less.

Another 5 minutes to down ice-cold tea and several minutes trying to find someone to cash us out, at least the waitress had dropped off the check when we were served our teas.  The waitress didn’t return  to our table, there was no one at the cashier desk, so we left cash on the table, we had barely enough to pay for teas and leave a real small tip.  We had intended on eating and using a debit card so we didn’t think twice about having money with us, besides the next smallest bill we had was a $20 (with no chance of change in sight: and $15.+ tip would be a bit too much.  The sweet tea wasn’t that good.

I noticed the place was starting to fill up, people crowded in the foyer, waiting area full, I didn’t have the heart to tell them all there’s at least 6 tables ahead of each one of them.  On the way out I grabbed a takeout menu that stated they closed at 10 we decided to stop there on the way back from our meeting.

Meeting over,  as we were riding to Big Blues Ribs and More, with ½ hour to spare before they close,  I was thinking, if they close at 10 pm and we get there by  9:45 pm would be out of there by 11 pm? (you never know if they caught up with the 6 table backlog)  Unfortunately or fortunately, depending on how you look at it, when we were sitting at a red light waiting to cross US 24 to get to the French Town strip mall and Big Blues  Ribs and More, off in the distance, toward our house, where we left every window open ,was flashes of lightening, cool looking but not too much fun to ride in. My DH yelled across to me, “Still wanna stop there?”  (Pointing to Big Blues)   I said no, it was 9:40pm the wind was picking up and we still had at least a 35 minute ride ahead of us. 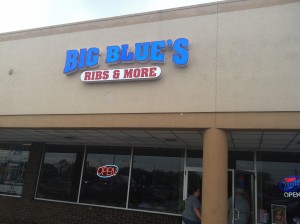 Big Blues Ribs and More is right off US 24 in Monroe, in a strip mall that houses Subway, Big Lots and and more.  It’s easy to find, neon lite sign, lots and lots of parking – oh and the food smells great.  I can’t imagine any restaurant being that crowded, unless it’s worth the wait. Only time will tell and we tried it again a day later.