Today is the day we’re going back to Big Blues, it’s late afternoon and the place is packed.  We got to sit on one of the long couches, but not too long.  This time we were seated in a booth, the menu was on the table and so was a list of the specials.  For some reason Big Blues Ribs and More has a barbecuy feel, you kind of expect to eat barbecue, so we both order one of the specials:  Barbecue platter – 4 bone ribs, pulled pork, homemade cole slaw, barbecue chicken an orange slice and garlic toast?   The orange slice was very good, juicy too.

Our waiter brought the drinks, took the order. The food was delivered to our table by the cook or someone wearing all white, with a chef’s hat.  Not sure why he personally delivered the meal, he may have been waiting for our reaction, because the amount of food we each received would feed a small family.   My DH’s reaction, way too much barbecue sauce, what were they hiding, he asked.

The ribs, only one or two ribs had actual meat the rest was barbecue sauce and bones.  My husband being somewhat of a barbecue connoisseur checked for a smoke ring (a telltale sign of a smoked piece of meat) finding none, he decided they were boiled and slathered. The pork was impossible to eat, the amount of sauce disguised any flavor it may have had, the chicken was dry and the garlic toast, nah.  (Now if it were a corn muffin).   So trying a bit of this and that, and eating all the cole slaw which was pretty good, we left two pretty full plates of food. 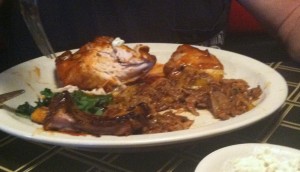 There was a woman, who was stopping at selected tables, who I believed may have been the manager, came over to our table and asked how dinner was.   My DH who is totally honest on all levels told her the dinner sucked.   She didn’t really know what to say at first, then asked why, and trying to take the sting out of the comment he said “we have eaten barbecue in many restaurants around the country, your barbecue has way too much sauce, which isn’t that good in the first place, the food is tasteless but “ he added “the cole slaw and tea is good”.  She retorted “I’m sorry you didn’t like it, then I guess you don’t want take home boxes” , “no thank you” was the answer.

I expected the man in the white hat to make an appearance, but he never showed.  While waiting for our check, we read the menu cover where there’s a story of the owner who was a cook and was fired one day over breakfast that he had prepared. His employer fired him saying  “this food sucks”   Gee that was the same reaction my husband had, I wonder if he was served barbecue for breakfast?  And who would put that on the cover of a menu of the restaurant you own?

We left thinking, that was a lot of money, over $30 not to eat or bring home leftovers.  And we have dogs too.  However in all fairness, the place is always packed (every time we pass it), so perhaps barbecue is not their forte.  Something is bringing in all those patrons.   We’ll probably give it another try – sometime in the future.

For bikers, there is good parking, a nice atmosphere, and an interesting menu.  Just ask before ordering , they might have a sample to taste.