I always believed (in theory) restaurants in high traffic tourist areas do not need to be great restaurants.  I’m sure you’ve seen this for yourself: pick any high traffic tourist area in any state, there will be every type of food for every type of taste. You can pick your favorite chain restaurant,try a local family fare or be adventurous and eat off the beaten path.  In any case there are usually so many choices, if you feel you have had a bad experience; you just don’t go back there. 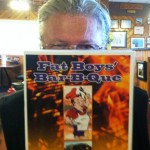 There are exceptions to my theory, take Las Vegas for example, that’s a tourist area that has a vested interest keeping a quality cuisine, they want people to stay and come back. But even in Las Vegas, you can find the so called “dives” to dine in.

My favorite high density touristy area is in and about Orlando Florida generic singulair. If you have been to Orlando, you know what I’m talking about. There’s a horde of restaurants, of all variety, from the mega type such as the “Eat Yourself to Death on 100 kinds of seafood buffet” to the corner 7-11, a convenience store, operating under Seven-Eleven Japan Co. Ltd (who would of guessed!) where you can stop in for a “Big Gulp”® and an “Big Bite”® and everything in-between. For all these restaurants there’s always foot traffic, tourists will be stopping in to eat. If you live in the area you should already know what to avoid.

On this trip we stayed in Kissimmee – a total Orlando tourist destination with lots of food choices.

According to our GPS, Kissimmee offers 600+ restaurants, all within close proximity to our hotel. We’re surrounded by food. But, like always, before food there’s bikes. That day we had planned a ride from Kissimmee to Dundee, Florida. A nice jaunt, but unfortunately on that day we made it less than half way to Dundee. Riding without sun screen, but wearing my helmet, (even though I just put down $25 for over the eyeglass goggles) in 98 degree temperature and 78 percent humidity (I think I might know where the term sweat hog comes from) I was cooking my brain. I need my brain to ride.

As we rode along the route I couldn’t help to notice my DHs screaming eagle springer was acting weird; and then he unexpectedly pulled over onto a premerger lane (the strip before a left turn lane). Because we ride staggered, instead of pulling ahead of him when he pulled over in the turn lane, as a smart unheated rider would do, I just stopped in formation leaving my rear end hanging out in traffic: did I mention it was rush hour? Slow to react (duh) and after several beeps from oncoming vehicles I finally got the hint and moved my street glide out of the left lane, sliding my bike in front of his.

I blamed my slow reaction on traffic noise and my helmet muffle; I didn’t realize his bike wasn’t running, and then I thought he actually might be lost. (That really never happens). Not lost, bike was fine, but running out of gas will make a bike act weird. After we took care of the gas issue, we headed back to our home resort, like I said very hot, and I should of rode topless (Aka lidless) my glasses were foggy and sweat was in my eyes. Not the best way to ride. And to top it off I looked like a drown rat when I finally did take off my helmet. And this was Florida in the first week of June not even summer.

Riding in Florida is easy; everything seems to be in a straight line, with little or no curves.The roads are remarkably, smooth and blemish free for the most part: nothing like Michigan roads that are peppered with giant potholes, pea gravel and loose dirt. Florida does have sand covered roads, some with deep sand that will make any biker go down, but I’ll save that story for another time. The road we were on was sand free, smooth, could see in all directions, and not to crowded. I was enjoying the breeze on my face and failed to notice the road was quickly merging to the right, creating one lane. And of course I also failed to stay 1 second behind my DH and somehow a driver in an older Mustang got between us. No other cars on the road in our traveling direction. The driver was a pain in the ass, as he matched my speed preventing me from merging from the disappearing lane. No printable comment for him.

Finally we were back at the resort, parked the bikes and jumped into the car. Men love air conditioning especially at full blast:to cool off the hot car of course. My hair, sticky, wet and hair spray smelly chilled me to the bone. I forgot to a jacket so I turned on the heater as we drove off, picking our way through the 600+ choice restaurants. This past October we had stayed in the same area, and I can honestly say from that visit, I will never eat Chinese food in Florida again, so tonight, it was anything but Chinese.

We drove a ways down the main highway, straight into Fat Boy’s Bar-B-Q. This was sort of off the beaten path; at least is was some distance from the all you can eat joints. In fact it was a straight shot down from our resort. I had one of those moments when you think to yourself, I should have rode.

There were two things I noticed when we pulled into Fat Boy’s: the parking lot wasn’t crowded with out of state or bar coded cars which I always associate with rentals. And the smell in the air: wonderful, mouthwatering and inviting. The force behind every good meal is its smell…did I say that right? Just the thought of something to tasty to eat and of course refreshing to drink had me up and out of the car in a flash.

Entering Fat Boys, you’re in a covered hallway, decorated by a newspaper rack and some gum ball machines. Open the door, you’re greeted by a stand up (plastic) cartoon guy in a cooks outfit carrying a sign and what I think is supposed to be a frying pan. The left side of the room is kitchen/cook ready, small salad bar straight ahead and the rest of the room is the dining area. 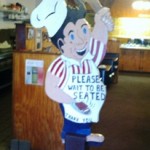 The dining area had assorted seating, mostly (well-maintained) backyard styled wooden picnic tables. The décor is pretty interesting. They have decorated each area with personal achievement pictures and old family photos – do I know these people? Elsewhere you’ll find forgotten cattle brands burned in wood (all smarty displayed) from cattle farms long ago. On the far left wall (facing in the entrance way) hangs a framed collage of pictures and newspaper articles with captions indicating that they had a fire and had to restart the business at least once, to get it where it was today.

The waitress stepped right up gave us the menus and immediately took our drink order. She was attentive and interesting, told us the place was family owned, and yes they did the barbecue on premise. The menu had a lot of choices, and the waitress, not being shy by any means, suggested a variety platter, which has a little of this and a little of that. Our order: the “Famous Bar-B-Q feast”, for 2 and beyond offering the smallest possible portions for something that sized.

Our drinks, Arnold Palmer’s, were good, cool and not made with sweet tea which was a plus. The platter finally arrived served with extra plates holding our selected sides: a baked sweet potato for me and French fries for the hubby. Considering it was a smaller dinner for two, the rations were pretty big and included Barbecue Chicken, Smoked Turkey, Pork (pulled), Brisket, or in this case more of a tender cut of roast beef, and a good sized portion of slaw. There was garlic toast and two corn cobblets. Like I said, the meal was designed to feed 2 people but could easily feed 4 and if you drank enough to fill you up, you might be able to squeeze in a fifth diner. Ribs are served dry, sauce on the table in plastic squeeze bottles but no sauce necessary, the ribs stood on their own. 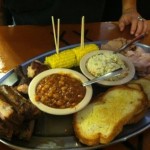 After thoroughly tasting everything, we were full. We were given take home boxes which were filled to the hilt taking the leftovers back to our home resort, with every intention of eating them later that week. But you know how good intentions are.

Fat Boys Bar-B-Q is a good place to kick back, enjoy good food and conversation. Not overly pushy wait staff, friendly and food knowledgeable. No rush to eat, the atmosphere and the seating arrangements could accommodate a large group. Going on a ride or visiting the Kissimmee area, this should be a stop on your way, better food than Disney (and less expensive), and full of local charm. Great biker destination, easy in and easy out!